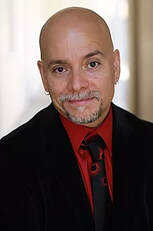 Steven M. Blasini - Co-Owner/VFX Supervisor
​
With over 80 film credits to his name, Steven has been creating Visual Effects imagery for productions of all types, from Feature Films to Webisodes, for over 18 years.

Born and raised in New York and self taught in all skills, from computer programming, computer assembly, network integration (he was a Novell Network Certified Engineer) and Internet provision, Steven started his own computer consulting firm, which later grew into various outlets, where he handled all things "computer" for his clients. This included turnkey software systems integrated with custom built hardware and networks. in 1991 after the success of "Jurassic Park" which utilized Computer Generated Graphics in an industry changing way, he taught himself all facets of Visual Effects Creation, from Concept Design thru to final output.

In 1997, during a seasonal recruitment trip to NY by the HR Head of Digital Domain, at the time the second largest VFX Studio in California, he was told that if he moved to LA he would easily find work and most likely be hired on the spot.

So, selling his company and packing all his belongings into his Dodge Caravan, he made the cross country trip to establish his dreams of working in the industry.

The recruiter was correct, he landed his first animator position in just a few days and worked his way up to VFX Supervisor and Department Head of the studio that hired him.

In 2001, alongside his wife, BenniQue, he launched BFX Imageworks and quickly established it as a goto, scalable VFX niche for all forms of independent film and television production throughout the world.

Steven currently serves on the board of the Los Angeles Section of the Visual Effects Society and is on the Special Visual Effects Executive Committee at the Television Academy.

BenniQue received her Associate of Applied Arts degree at the age of 19 and immediately dove in to the creative world as a Graphic Designer. From Logos to Billboards, nothing was too big or too small!

Her first job was as billboard designer for Duplex Advertising in central Texas which was then followed by a lucrative position as Lead Packaging Illustrator at Radio Shack's national advertising department. This led to her landing the position of art director for a Texas based automotive company where she was responsible for product branding.

After moving to NY in 1991, she continued as a freelance graphic designer with clients from Wall Street and various publishing companies.  She wrote and illustrated two children's books, "Link and
the Lucky Penny" and "Fabulous Fred Said" which are currently available through XLibris Publishing.

A final move to Los Angeles in 1999, led to her meeting and marrying Steven and together they founded BFX Imageworks, where her artistic talents were a natural fit, from matte paintings to main title design, compositing to rotoscoping and so much more.

Together they have contributed their artistic talents on over 80 feature films, television shows and counting!